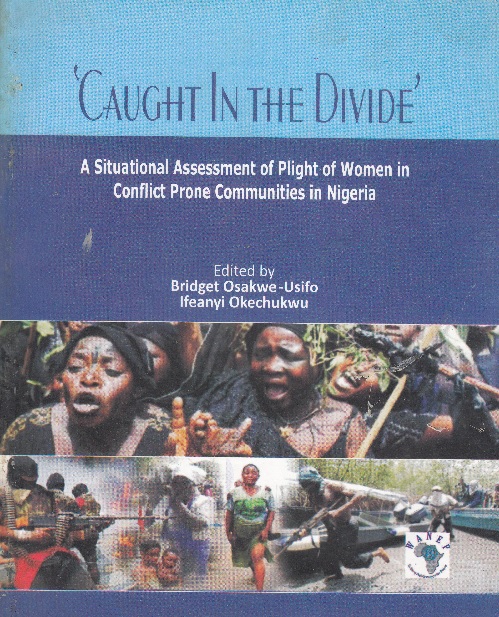 AS PART OF ITS effort in strengthening and positioning women to play functional role in peace and security across the country, the Women in Peacebuilding Programme of WANEP-Nigeria embarked on a situational assessment of the plight of women in conflict-prone communities of Nigeria. The assessment highlighted the psycho-social impact of these violence on women as well as the opportunities for women’s capacity to develop networking, mobilisation and peacebuilding platforms as a complementary role towards the prevention or mitigation of violent conflicts and insecurity in Jos, Plateau State.

Other civil society organisations, including the National Council for Women Societies (Plateau State Branch) as members of WIPNET in the State formed part of the core group of assessors during the design of-the instruments as well as its application in the identified pilot areas, while the Plateau State Ministry of Women Affairs provided Supportive roles through technical expertise in the design and application of the instruments as well as validation of the data.

Initially, with support from Oxfam Novib, WIPNET had facilitated the formation of , Steering Committee on the implementation of United Nations Security Council Resolution 1325 in Nigeria. This Committee, also referred to as Friends 0f 1325 in Nigeria”,  was set up to provide a platform for deliberations on effective strategies for implementation of the Resolution in Nigeria and the inclusion of women in peace Process’ This committee lent its provided Support to the assessment as well as earliest direction to achieving success for the assessment.

Thus, WIPNET embarked on a gender specific strategic conflict assessment (SCA) of Nigeria between June and August 2Ot0 in selected states in Nigeria, namely, Benue, Borno, Plateau, Ebonyi, and Delta. Others are  Anambra, Abia and Enugu States, to measure the impact of armed violence on women and determine core issues for policy implementation in Nigeria. The states were chosen considering the frequency  and intensity of violent conflicts in those states in recent time. The specific objective of this assessment is to examine the effect of conflict On women with the possibility of finding ways of protecting them and healing the traumas they undergo in the aftermath of conflicts. It aims to

The target groups for this assessment v/ere indigenes, victims/survivors, state and federal government workers, single mothers, widows, youth, teachers, politicians, and other key stakeholders. The assessment was primarily qualitative in scope and employed semi-structured interview guidelines for informal, individual, focus group discussions (FGD), and in-depth interviews. Observation and random sampling techniques were also used to elicit further information during the assessment, while relevant literature with regards to conflict was used to obtain background information on conflict situations in Nigeria and situation of women in times of crises and conflict.

Preliminary findings from the assessment yielded specific results and showed similarity of ideas and thoughts despite differences in sex, age, and location of respondents. Majority of the respondents shared similar views about the root causes of armed conflict stating that the most common root causes of armed conflicts are rooted in political ideology and the quest to satisfy basic human needs. However, the underlying causes are systematic structural violence which refers to situations where injustice, repression and exploitation are built into the fundamental structures in society, and where individuals or groups are damaged due to differential access to social resources built into social system. In the context of the states reviewed, gender discrimination, suppression, lack of political representation / decision making, education system, economic inequality and exploitation are the main root causes for the overt protracted armed conflict.

The findings revealed further that armed conflict affected majority of the residents and have created enormous upheavals at the personal, family, societal, and community leve1s. It has destroyed physical infrastructure and social harmony. It caused immense pain, both physically and emotionally but at the same time it created opportunities for self-empowerment of women, men and marginalized communities which never existed before. People have become increasingly self-confident and aware of their rights as well as need for respect and dignity of the excluded groups. People’s needs and rights, socio-cultural, political and economical need to be ensured. These are all positive aspects ‘but at the same time many victims from both sides are waiting for the right time to take revenge as violence has gradually become a means for people to be visible and to be heard.