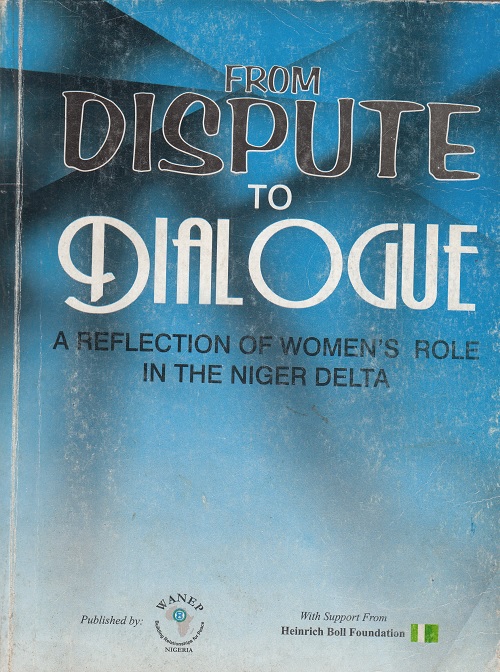 FROM DISPUTE TO DIALOGUE: A REFLECTION OF WOMEN’S ROLE IN THE NIGER DELTA

This publication is like touring Niger Delta in a hurry. This is because in three short days the organisers of this consultative meeting of which this publication is the report of the proceedings captured’ the dynamics of conflict, conflict resolution and peacebuilding in the Niger Delta.

The role of women in peacebuilding has long been neglected’ I saw this firs hand when I got involved in the negotiations after the ugborodo uprising of February 4, 2005. Addressing some of the arrested women ,the government official who was leading the negotiations warned the Women not to allow themselves to be used. he allso told them not to believe anyone who tells them that women can not be arrested or prosecuted.

As I watched the video recording of this incident I could not help but marvel at how a government official could patronise women in such a condescending manner. The message which he wa spassing was clear to any discerning observer women have no mind of their own and therefore could not be involved in peacebuilding. contrary to this government official’s view weall know that Women bear the brunt of the impact of conflict and injustice. To therefore argue that women are being used is to say the leas disappointing.

West Africa Network for Peacebuilding (WANEP )through its Women in Peacebuilding Network (WIPNET) have challenged this patronising view of Women involvement in peace activism.The message of this consultative meeting as encapsulated in this report is that Women also feel the impact of conflict at times more than the men. Therefore they arso have a big stake in peacebuilding.

The various ways women could participate and in fact enhance their capacity in peacebuilding has been captured by the various papers presented and the subsequent discussions and group work. The question and answer sessions which follows every paper provides penetrating insights into how the capacity of women could be built in the area of peacebuilding.

one of the major gaps which I have noticed in programmes that concen women has been the absence of male participation. I am aware that this is a deliberate policy to encourage women participation but it also diminishes the resources which the men will bring to bear on the issue. Moreover, it is the men that are marginalizing the women, so it is the men that need conversion.

This conference has filled that gap. Men presented three papers during the consultative meeting. Men even chaired some sessions of the meeting. I think that through this type of inclusiveness we shall be on our way to gender equality and a more proactive involvement of women in nation-building.

This consultative meeting instead of providing answers have opened up the space for a more robust and vigorous engagement on the issues that concern women. It is then left for us to move the conversation a few notches up. This publication is timely especially coming a few months before the 2007 elections. It is therefore part of WANEP,s contribution towards encouraging women to participate actively, in the democratic process. It is also a call on all well-meaning people of the world to avoid violence no matter the level of provocation. The women of the Niger Delta have shown us the effectiveness of non-violence. They have displayed a rare talent in organising. Their tenacity resonates throughout the length and breath of the Niger Delta.

As you read this publication, ask yourself how can I contribute to peace in the Niger Delta? Ask yourself also how more women could be involved in the peace processes not only in the Niger Delta but all over Africa and the world. we disregard the role of women in peacebuilding to our peril. ‘