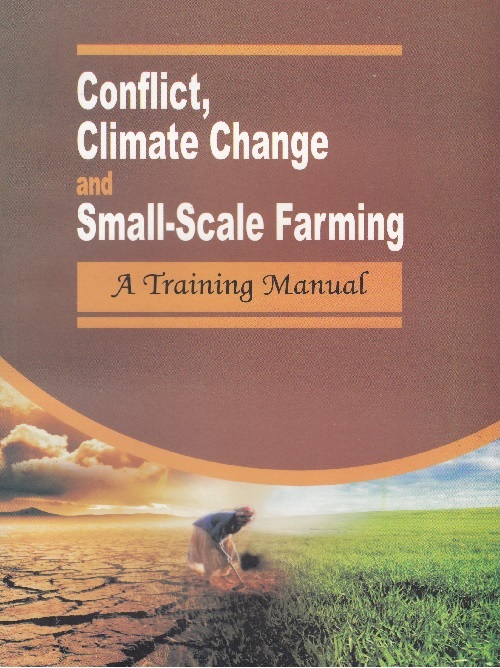 Climate change has been described as the most significant challenge of the 2lst century. Its impact ranges from extreme weather conditions, irregular rainfall patterns, rise in temperatures, sea level rise and ocean surges etc. which negatively affect lives and livelihood directly or indirectly. Climate change has the potential to affect agriculture through changes in temperature, rainfall (timing and quantity), increase in CO, solar radiation and the interaction of these elements.

A primary driver of climate change is the increase in greenhouse gases like gases nitric oxide, nitrous oxide, carbon dioxide etc in the atmosphere, especially carbon dioxide (CO2) that has the greatest impact on climate change. Experts have linked the production of CO, to human activities such as overgrazing; prolong land use, use of fossil- based fertilizers and pesticides industrial growth, use of energy, burning fossil fuels, deforestation and other human activities.

Many of the first impacts of climate change to be felt around the world have been and will be in the agriculture sector; with cases of reduced yields, destruction of cultivated farmland. Climate change is already threatening food supplies around the world. Those impacts will only be exacerbated as temperatures increases and rainfall patterns changes. Extreme weather events like flood and drought also significantly contribute to the threat to food production and the food value chain.

In Nigeria research on expected climate change in Nigeria (Abiodun et al 20ll) covering historical record (between l97l and 2000) shows a trend of rising temperatures in Nigeria which is projected to increase over time. The research predicted longer rainy seasons in the south of Nigeria and shorter rainy seasons (i.e. early cessation) for northern Nigeria. The research also predicted heat waves are likely to occur more often over the entire country in the future; more extreme weather events, such as rain and windstorms with increase in frequency; and sea level rise will occur along the coast.

While climate change is and will drive aridity and desertification in northern Nigeria, it is increasing flooding and erosion (gully, sheet and coastal/beach) in the middle belt and southern regions especially in the coastal and rainforest ecological zone (Uyique and Agho, 2007). Flooding and erosion has increasingly been reported as a major climate change hazard in almost all communities in these zones. Other climate change hazards include landslides, severe windstorms, excessive heat, drought and late and variable onset of the rainy season trend of rising temperatures, reported to be increasing in Nigeria since 1901 (Odjugo, 2010).

Sea-level rise, resulting from climate change, is affecting crop production in coastal areas. The Nigerian Environmental Study/Action Team CNEST, 2004), reported that sea level rise and repeated ocean surges is leading to increased coastal erosion and associated intrusion of sea-water into surface water and groundwater resources. Exacerbating the problem is the fact that many coastal ecosystems are degraded due to a loss of mangrove forests which, when present, provide a protective function reducing the impact of salt water on inland areas of crop production.

The above climate change hazards are predicted to have devastating impacts on agriculture in Nigeria, causing lower crop productivity and difficulties with livestock husbandry in the north. Whereas, the state of the agricultural sector in Nigeria now and in the future is critical to Nigeria’s economic and social well-being as agriculture is the most important sector of the Nigerian economy in terms of its contribution to Gross Domestic Product (GDP) and employment, contributing approximately 42percent of GDP in2009 (National Bureau of Statistics, 2009). Despite a growing urban population, the majority (>56%) of Nigerians still reside in rural areas (Earth Trends, 2003) where the main economic activity is agriculture. According to FAO (2010) 60 percent to 70 percent of the population is engaged in agriculture. This puts the agricultural sector ahead of other sectors in terms of the potential consequences of climate change impacts for the majority of Nigerians.

The Nigerian agricultural sector is characterised by dominance of small producers on small land holdings, low technology use, and reliance on human labor. While some larger farms have been established by organisations and individuals, small scale farmers account for approximately 95 percent of total agricultural output (Federal Ministry of Agriculture, 2005). Women’s labor is very important with women being major producers of staple food crops, estimated at between 60.to 80 percent of the food in Nigeria. In addition, women are engaged in most of the post-harvest activities especially food processing (Akinyele et al l99l).

Agriculture sector remains the most vulnerable to global climate change impact. The impact is even stronger in Nigeria, where agriculture is essential for daily subsistence, and where adaptive capacity is low. IPCC (2007) indicated that smallholder and subsistence farmers, pastoralists and artisan fisher folk will suffer complex, localised impacts of climate change as they face an increasingly complex set of challenges that make them more vulnerable to changes that are beyond their control. The change which undermines food security in Nigeria on several levels; in extreme cases, individual farm production is no longer sufficient for household consumption and intense rain and flooding disrupts accessibility to markets. Climate change results in malnutrition, especially of women and children, it leads to out-migration from rural farms by men and youth (i.e. farm labour), and loss of food crops due to impacts resulting from climate change.

Nigeria’s agro-economic regions made up of communities in which farming is not oniy the major means of livelihood, but also essentially small scale with productivity remaining low. Nigeria itself is classified in the category of socially vulnerable zones, comprising mainly populations with low incomes constantly experiencing food shortages. Small scale farmers and farming communities throughout Nigeria have, in most instances, survived by mastering the ability to adapt to widely varying weather and climatic conditions. However, the dramatic growth in human population is imposing enormous pressure on existing farming production systems even as the reality of climate change is impacting negatively.

Despite these changes, small-holder farmers are developing strategies to cope with and adapt to the impacts of climate change. It is important to recognise that in the past many communities have faced harsh changes in environmental conditions and over time have been trying, testing and adopting different types of coping and adaptation strategies for crop and animal production. Small scale farmers are expected to manage the more insidious effects of long-term climate change that arc now occurring at an unprecedented rate, against the backdrop of very unfavorable economic scenarios and other external stresses such as poverty, lack of access to basic services, poor health conditions and lack of voice. Small scale farmers continue to struggle to maintain their income by continuously trying to increase yields in their production systems. The current pressures will demand the development and implementation of appropriate methods to address issues of vulnerability to global warming and the consequent climate change needed to assist sma1l scale farmers to further develop their adaptive capacity and lead to better economic, social, and environmental outcomes (Fa1aki, 201 I).

Rural households engaged as subsistence and smallholder farmers are most vulnerable to the impacts of climate change on agriculture. They are often affected by increased likelihood of crop failure; land degradation due to over cultivation; outright loss of livelihoods due to extreme weather events, increase in diseases and mortality of livestock, and/or forced sales of livestock at disadvantageous. Prices; increased livelihood insecurity, resulting in assets sale, indebtedness, out-migration and dependency on food aid; and downward spiral in human development indicators, such as health and education.

These impacts further aggravate the stresses already associated with subsistence production, such as isolated location, small farm size, informal land tenure, low levels of technology and narrow employment options, in addition to unpredictable and uneven exposure to world markets that smallholder farmers particularly risk-prone in the face of climate change. Indirect effects of climate change on agriculture include the effects on pests and diseases and the impacts of these on agricultural production, the impacts on health, and the impacts on agro-related socio-economic activities.

The poor performance of the agricultural sector is mainly because most farming is directly dependent on climate. For example, less than two percent of farming in Nigeria uses irrigation, hence most agricultural production is rain-fed ( Falaki, 2011). As a result, changes in climate factors have significant consequences for the agricultural sector. The low adaptive capacity of crop farmers in Nigeria can be attributed to a variety of factors, including poverty lack of access to resources, and poor infrastructure, etc.

Given the current concerns with climate change and it’s impacts on small scale agriculrural productiviry especially in the most vulnerable agro-ecological zones of the country and vulnerable groups, particular$ women, there is an urgent need to sensitise small scale farmers about the projected climate change in their regions and the current coping strategies, and building on these coping mechanisms to develop adaptation strategies for projected changes in climate.

In line with this, The West Africa Network for Peacebuilding in partnership with OXFAM Great Britain and its partners United Nations Development Fund (UNDP) and the Climate Change Department of Federal Ministry of Environment on the platform of the CLIMATE CHANGE ADAP’IATION IN SMALL SCALEFARMING project is working with small scale farmers (crop farmers, pastoralist, fisher folks, Agric Extension officers and critical community based NGOs and CBOs) in selected communities/states in Nigeria to build their capacity on climate change adaptability in agriculture thereby enhancing the resilience of an average smallholder farmer to the impact of climate change. The objectives of the project arc to: increase small scale farmers knowledge and awareness of climate change impact on agriculture especially small scale farming; create a ‘farmer to farmer’ directed learning on climate change adaptability in Agriculture; deepen beneficiaries’ understanding of the nexus between climate change, conflict, small scale farming and food security. The project will also enable the partners to assess the knowledge gaps existing among farmers on issues of climate change and form a critical mass of farmers that can provide information and awareness on issue of climate change in Agriculture.

The project has specific focus on women and youth small scale farmers because of their peculiar vulnerability especially the vulnerability of female farmers who live in patriarchal rural communities and often inhibited by poor access to credit, land tenure system, illiteracy and poverty. Despite these the major task of ensuring family welfare rests on the shoulders of the already vulnerable women. Therefore direct effort to build their resilience to the reality of climate change on their agricultural practices will go a long way to ensure they develop the capacity to mitigate the primary and secondary impact of climate change on them, their practices and households.

In line with the major aspect of the project, the capacity building aspect which includes Training of Trainers Workshop at the National level and the community/state level training workshop, the West Africa Network for Peacebuilding WANEP-Nigeria, the main implementer of the project and its partners the Pan African Climate Justice Alliance (PACJA), The Centre for 21st Century Issues, developed this TRAINING MANUAL ON CLIMATE CHANGE ADAPTATION IN SMALL SCALE FARMING”

The Manual is a Trainers’ manual developed for the use of trainers that conduct training for small scale farmers on climate change adaptation in agriculture at the community level. The manual is developed in the context of Resilience building, Prevention /mitigation of agro producers’ conflict, Food security and Participatory Learning Action with a lot of training aid and participation by the trainees.

One Comment on “Conflict, Climate Change and Small-Scale Farming. A Training Manual”